Why learn java programming: 5+ reasons that answer your question!

It was in 1991 that Sun Microsystems made history. The aim was to develop a programming language for television set-top boxes. James Gosling, the father of Java, would never have predicted that he would lay the foundation for the future of the IT industry. Java uses the most sophisticated syntax of object-oriented programming languages ​​and follows the simplest and most readable form of writing code. In addition, Java claims to have several advantages that give it a decisive advantage over other programming languages.

Compiling a Java application produces bytecode that can be run on any platform using the Java Virtual Machine. For this reason, Java is also known as the WORA (write once, run everywhere) language. Today, Java is one of the most popular programming languages ​​because it is lightweight, can be used to create customized applications that serve diverse purposes, and is extremely fast. According to the April 2019 TIOBE Index, Java is the number one programming language.

What does Java do?

Java has become invaluable to developers by allowing them to:

● Create software on one platform and operate it on virtually all other platforms.

● Construct a program that operates within a web browser and can access the available web services.

Why is Java important? 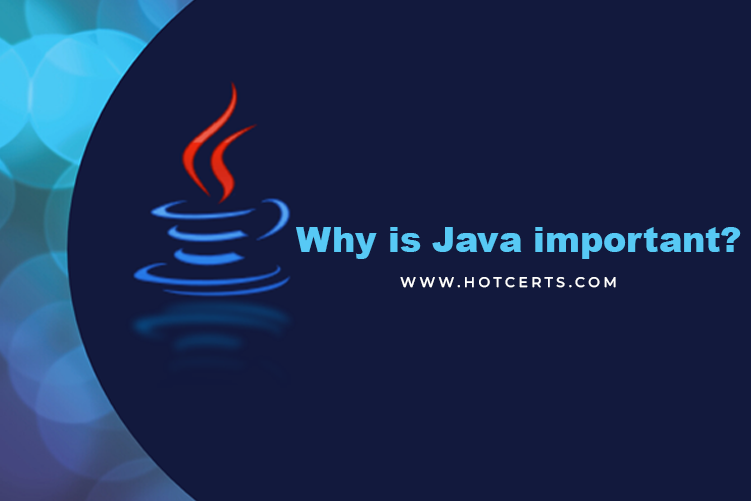 The world of technology is continuously evolving, but at an unprecedented pace, people, and even coders, tend to forget their origins and the underlying principles. And the Ideas that influenced the abundance of modern technology. That is why Java is so important. Java remains an essential and valuable programming language today, and it has shaped how technology evolves over the next 20 years and continues to evolve into the unpredictable future.

Why is Java so popular?

The answer lies primarily in the in-depth testing, updating, and delivery consistency that Java has provided. Java has been tested, improved, extended, and proven by a dedicated community of Java developers, architects, and enthusiasts. Although its origins date back almost 20 years, Java has evolved consistently. Java is designed to develop portable, high-performance applications for the broadest range of computing platforms possible, enabling the fundamental beliefs of comprehensive accessibility and cross-platform interactions. Enterprises can deliver more benefits and enhance end-user productivity, communications, and collaboration by making applications available across heterogeneous environments. It can significantly reduce enterprise and consumer application ownership costs.

If you are an experienced Java programmer, that is, if you have more than 5-8 years of experience and are thinking about how to reach the next level, you are in the right place. Apart from Object Manager, the path many programmers have chosen, other technical and better career opportunities are currently available. It is perfect for programmers who do not have HR management skills and love to continue coding, developing, and practicing.

Choosing the appropriate career option according to your capability is essential. Becoming a project manager or entering HR management without skills can be frustrating, mainly because you do not want to be frustrated. Getting the job done by the developer when you can do it quickly. HR management is also a very different skill and requires working closely with upper and lower levels. Regular discussions with companies, executives, and other senior executives are required to finalize deliveries. However, you will also need to work with developers, QA, and other resources to complete that task. It is not easy, especially if you need to manage a large team.

On the other hand, more technical career paths, such as becoming a DevOps specialist, scrum master, or software architect, are suitable for programmers who are always practical and want to get closer to technology. Experienced and skilled programmers are in great demand, and you should never expect them to become obsolete after years of coding. Many organizations, such as investment banks, drive this technological career path. This pass allows you to assume high-level positions, vice presidents, and executive directors by working well in the technical field.

Java Programming is easy to learn. 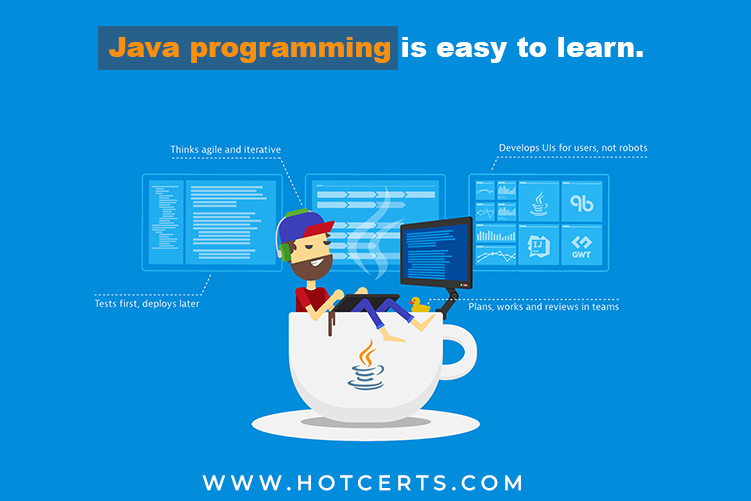 Many will be surprised that this is one of the main goals behind learning Java and thinking of Java as the best programming language, but it is still so. When the expectation of absorbing information is high, it is difficult to concentrate in a limited time and make a profit. That is the situation for most expert ventures. Java has the familiar English-like language structure with the fewest enchantment characters. For example, the Generics Point section allows you to explore and adapt your Java programs quickly and easily. Writing a program in Java is very easy if the developer knows that installing the JDK and setting the PATH will start a failure and understands how Classpath works.

Another purpose behind Java’s creation of computer programming languages ​​is its rich API. Above all, it stands out in the light of the fact that it accompanies the establishment of Java. Java provides APIs for I / O, organization, utilities, XML parsing, database associations, and almost everything. Everything remains protected by open source libraries such as Apache Commons, Google Guava, Jackson, Gson, and Apache POI. In addition, Java software engineers can observe the primary available source libraries in my post 20 for researching useful libraries that Java designers should know.APIs are so popular because they make it easy for programmers to build applications and use different technologies without knowing how the internal implementation works.

● As for the Java API, it’s compatible and handles a wide range of procedures and functions.

● You will also be impressed with the over 4,500 APIs available to developers.

Eclipse and Netbeans have taken on the enormous task of making Java stand out among other programming dialects. Coding in the IDE is beneficial if you are unlikely to have coded in a DOS editor or Notepad. Not only do they help complete the code, but they also provide groundbreaking investigative capabilities that are the basis of the actual turn of the event. 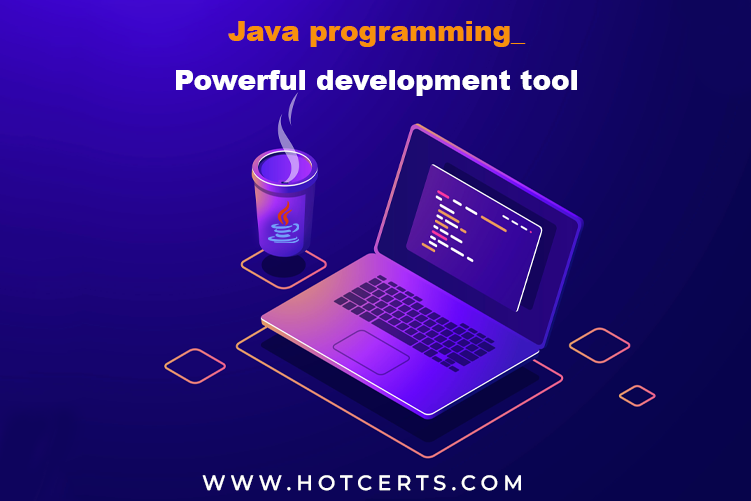 With the Incorporated Development Environment (IDE), Java advances have become more comfortable, faster, and more familiar. It is not difficult to look up, refactor, or read your code using the IDE. In addition to the IDE, the Java stage includes several Maven and ANT for building Java applications, Jenkins for continuous integration and propagation, a reverse compiler, JConsole, and a Visual VM for checking heap usage. There are different devices.

Open-source libraries ensure that they should use Java everywhere. Apache, Google, and other associations have provided many great libraries that make Java advances simple, fast, and practical. There are structures like Spring, Struts, and Maven. It ensures that Java improvements follow the best practices of programming craftsmanship, facilitate the use of configuration designs, and help Java engineers complete their work. Looking for usefulness on Google before writing your code is usually a good idea. Currently, it is highly likely to code, try, and be accessible for use. Similarly, for suggested libraries for Java engineers, you can see the top 20 libraries and APIs for Java programmers.

A solid and prosperous network is the highest quality Java programming language and stage. No matter how good the language is, it is unbearable without a network that helps, helps, and provides insights. Java was lucky as many dynamic gatherings, StackOverflow, open source associations, and some Java client gatherings support them. Some networks support fledgling, advanced, and even master Java developers. Java is making progress in regaining and delivering network trends. Many open source developers contribute as committers, analyzers, and so on. Numerous expert software engineers make free recommendations on various Java discussions and StackOverflow.

It is impressive and gives a great deal of certainty to Java beginners. Java as a programming language is Omnipresent. In short, it is everywhere, from mobile phones to set-up boxes to satellites. Therefore, a complete understanding of Java presents an excellent job opportunity. And Java has a great support community. Therefore, learning is not a problem in Java at all. Along with the support community, numerous online resources can be perfect companions. Multiple forums answer all Java-related questions and errors.

Individuals like free things, right? Therefore, COST is substantial if software engineers are familiar with programming languages or if associations need to take advantage of innovation. Java is free from when it was developed, so you do not have to pay anything to create a Java application. This free one also helped Java become well known among single developers and large groups. The accessibility of Java software engineers is another big thing, allowing associations to choose Java for virtual event turns.

Javadoc is an extraordinary document that teaches a lot about the Java API. Without Javadoc documentation, Java would not be mainstream. That is one of the main reasons and one of the reasons Java is the best programming language. Not everyone has the time and expectation to skim the code to understand what the technique does or how to use the class. Javadoc simplifies learning and provides a good reference for coding in Java. With the advent of IDEs such as Eclipse and IntelliJ IDEA, you do not have to glance at Javadoc programmatically, but you can get all the data in the IDE window.

In the 1990s, this was the fundamental explanation behind Java’s notoriety. The potential for stage autonomy was incredible; the Java slogan was “can be done anytime, anywhere,” and the abbreviation “WORA” was attractive enough to pull in a load of recent improvements in Java. It is one of the many reasons why Java is the best programming language. Most Java applications are written on Windows conditions and run on the Linux stage.

Indeed, Java is ubiquitous, in the work area, versatile, on the card, and as universal as Java developers. Java software engineers will dwarf those who are fluent in other programming languages. There is no information to support this, but it depends on your understanding. This huge accessibility of Java software engineers is another motivation behind why associations choose Java for new improvements over other programming languages. That said, writing computer programs is a vast field, and if you take a quick look at C and UNIX, it is still permanent and well-founded to live for another 20 years, as is Java.

It is everywhere, desktop, mobile, etc. It is used in banks to deal with transaction management. Information Technology utilizes it to resolve performance dependencies. It is the discipline that hires most Java developers. Java is used to write algorithms in the stock market to determine which companies to invest in and is also used in server-side applications. Therefore, you are not limited to just one domain! It is also employed by many prominent companies such as Philips, CapitalOne, Google, and Uber.