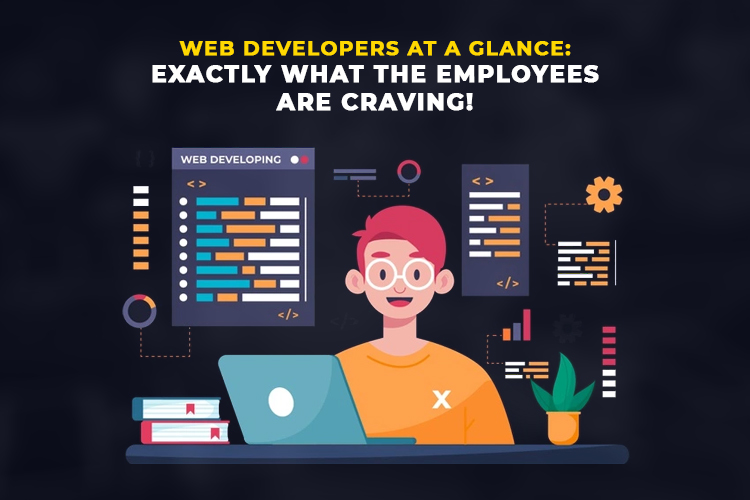 Web developers at a glance: exactly what the employees are craving!

What does a Web developer do?

A web developer or programmer transforms a web design into a website created by a client or design team. They do this by using different languages to write complex lines of code. Web developers are doing a challenging job because they have to adopt a simple language that we understand, e.g., English, and translate it into a computer-understandable language, such as Python or HTML. The tasks associated with building, creating, running, and maintaining websites and web applications that run online are web development or website development. However, it may also include web design, web programming, and database management.

The term development is usually reserved for constructing these things (programming the site). Related essential tools are HTML (Hypertext Markup Language), CSS (Cascade Style Sheets), and JavaScript. However, many other programs are used to “manage” or facilitate the construction of sites that require you to write code and run it “from scratch.” WordPress, Joomla! Many content management systems (CMS), such as Drupal, TYPO3, and Adobe Experience Manager, fall into this category.

The role and types of web developers:

A web developer is responsible for building and maintaining the core structure of a website. Web developers involve much technical work, such as complex coding and advanced programming languages. In a nutshell, they take ideas and concepts laid out by designers and turn them into real, live, fully functional websites.

More specifically, the obligations of a web developer include building the website itself. This includes coding and configuring servers and databases on the backend and embedding capabilities for users. You may also run tests and debugs to handle a set of post-boot services, such as providing continuous support and maintenance, fixing server or hosting issues, and so on. Web developers usually focus on a few programming languages. However, the language you use depends on the type of web development work.

Back-end developers use advanced programming languages ​​such as PHP, C #, Java, Ruby, and SQL, NodeJS, and other server-side frameworks to code databases and servers. Back-end development, also known as server-side development, primarily covers aspects of a website that are “behind the scenes” that visitors cannot see from the front end.

Finally, the full-stack developer codes both the front and back ends of the website. They have a solid understanding of how these parts work and work together. Full-stack developers code web pages using CSS, HTML, and JavaScript and set up and configure servers, code application programming interfaces (APIs), query databases, and more. 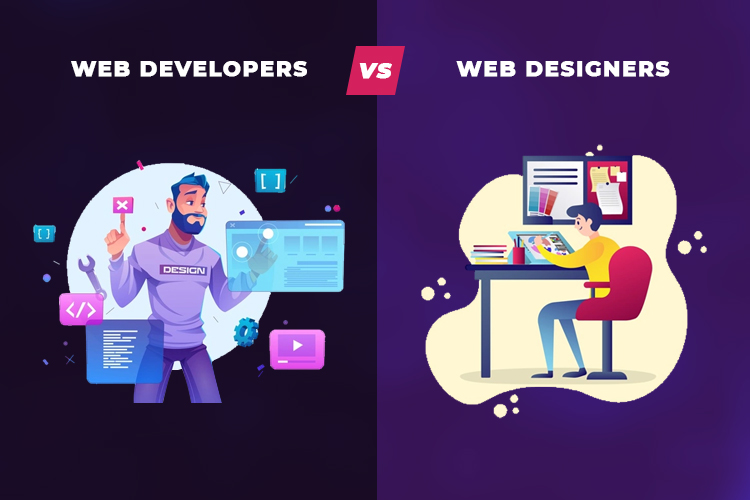 A web developer is responsible for building and maintaining the core structure of a website. In contrast, a web designer performs the role of a graphic artist who is responsible for the aesthetics, designing, and the way a website appears. Successful web designers need to have an array of creative, graphic, and technical skills. Web developers need to transform their web designs into functional websites using coding languages ​​such as HTML, JavaScript, PHP, and Python.

Both web designers and web developers play essential roles in building, building, and maintaining websites. Ultimately, the two roles are interdependent to provide high-quality products. The main difference is that the developers focus on the technical aspects of the project, such as programming and coding. The designer handles the visual and conceptual work needed to ensure a solid UX and UI.

The skills a web developer needs:

Besides these technical skills, additional non-technical skill sets can help you as a web developer. This includes problem-solving and analytic thinking, which is helpful during debugging. It is also essential to acquire solid communication and collaboration skills to work with clients and other key stakeholders (such as web designers). There are also some tools and platforms that web developers use to get their work done. This includes Jira for problem tracking and GitHub for code version control.

The future of web development:

Artificial intelligence (AI) is the future of web space development. It’s one of the critical technology trends used by many big companies like Google and Microsoft. One of the latest AI implementations, Grid, makes web development easy by starting content-based development. There is no template or code. Web developers can easily give instructions and lay out what they need. Another component of AI for web development is artificial intelligence, ADI. This implementation helps provide web developers with customized software options. If you plan to be successful in the field of web development, make sure you have AI and ADI technology sounds to give the best user experience through your website.

Not only can web developers develop a significant online presence for their business, but they can also leverage data to improve and interact with their clients. By merging big data through the power of machine learning, web developers can add value to their existing skills and expect better website results.

The IoT, also known as the Internet of Things, is emerging rapidly today. Web developers are not directly linked to the Internet of Things, but they can implement it while developing web applications. Suppose you’re looking forward to implementing IoT in your web development projects. In that case, you should also be familiar with the software, hardware programming, networking, system engineering and user interfaces, mobile app development, machine learning, and tools. Upgrade your skills and aim for a higher-paid job.

Simply put, the future of web development is driven by technology. If you plan to pursue web development as a career, consider these high-demand trends and upgrade themselves accordingly.